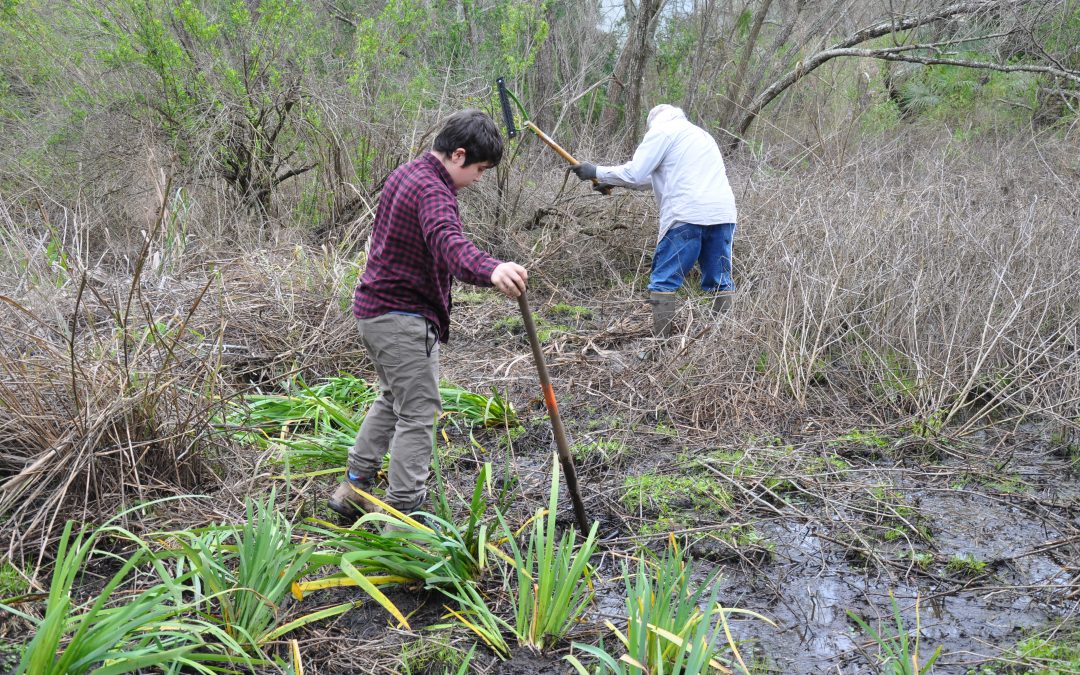 More than 500 giant blue Louisiana irises rescued from a plot slated for development have found a new home in the wetlands along the Nature Conservancy’s Lafitte Woods Preserve nature trail in Grand Isle.

Once abundant across coastal Louisiana, the state wildflower’s numbers have declined over the years due to a range of factors, including the use of herbicide to keep drainage ditches clear of weeds and the intrusion of saltwater into once-freshwater wetlands.

While not endangered, the species is much less visible across much of southeast Louisiana. In an effort to raise public awareness, the Louisiana Iris Conservation Initiative has relocated nearly 30,000 irises to refuges.

Residents used to grow up seeing giant blue irises blooming along the road, said Gary Salathe, who heads the initiative. His own parents would take him out to see the irises each spring; it was part of the region’s culture.

“Now, there’s a whole generation of people who have never seen Louisiana irises blooming in the wild,” he said.

Volunteers from across southeast Louisiana banded together to assist with planting the irises in Grande Isle, where they’re expected to bloom soon and reach their peak between the end of March and the first week of April.

“This will bring some much-needed attention to the importance of Grand Isle’s maritime forest. We are known for our beaches and world-class fishing, but we are also home to a very important maritime forest that now includes hundreds of Louisiana iris,” said Grand Isle Mayor David Camardelle.

For communities like Grand Isle that thrive off tourism, the irises provide another attraction for visitors, especially birdwatchers who will flock to the area as migratory birds stop off in Louisiana on their journey north from the forests of Latin America.

“The nature trail will just be gorgeous right at the height of spring migration for birding,” said Jean Landry, the Grand Isle Nature Conservancy director. “I’m expecting a spectacular show.”

Plus, the irises will serve as an additional filter for runoff produced by the Grand Isle community while bolstering native habitat, Landry noted.

“The more holding areas where these waters pass through the more opportunity there is to take those pollutants out of the water before it gets to the areas we recreate and fish in,” she said.

Where Bayou Sauvage was once covered in irises, Hurricanes Betsy in 1965 and Katrina in 2005 devastated the population after sending saltwater in the wetlands. But now, the irises replanted in the area are healthy and thriving, ready for viewing in the next few weeks.